I’m pretty sure that the first time I ran in Perth, some time last winter (summer if you’re in the Northern Hemisphere), I ran past at least one person wearing an HBF Run for a Reason t-shirt. It seems that over the past nine months, those blue t-shirts have been EVERYWHERE (on runners). I haven’t yet spotted them in a shopping mall. Well, since Sunday, there are a further 31,700 HBF Run for a Reason t-shirts in circulation. Even I now have one. 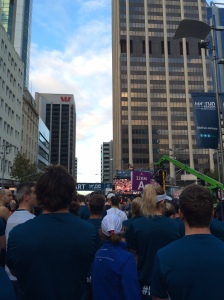 The HBF Run for a Reason is one of Perth’s largest fundraising community runs which attracts runners, walkers, strollers and the odd elite. This year there were three distances on offer: 4km, 12km, and the new 21.1km. I opted for the 12km as I’d already registered for a half marathon in May and I’m trying to be sensible in my old age. This also meant an extra 90 minutes in bed which is not to be sniffed at at any age. 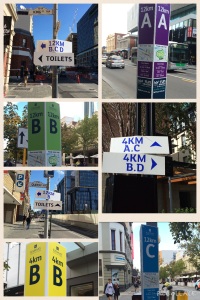 I have nothing but good to say about this year’s Run for a Reason. Over $1,257,466 was raised through runner fundraising and donations at registration for charities such as the Cancer Council, Diabetes WA, Lifeline WA, and the Heart Foundation WA. Many runners had specific reasons for running such as raising money in memory of a loved one or for a charity for which they had a close affinity. My reasons were fun, celebrating the Yes victory in the Irish marriage Equality Referendum, and gratitude for being healthy enough, and having the freedom, to run in this great city. Crossing the line in under 60 mins was a vague hope but not a deal breaker.

As with many major events in Perth, extra public transport services were provided, free of charge to participants. There were plenty of clean empty, portaloos in the CBD near the race start site which in my book is a kind of victory in itself. The start line was very well managed, with lots of clear signage for different start waves depending on participants anticipated race time. The atmosphere before, during and after the run was fabulous – Perth was teaming with happy people on Sunday morning. The 12km race started bang on time. The route was populated by enthusiastic volunteers and music and well-wishers. My shins were killing me for the first 8km but I soldiered on and crossed the line in 58:11 mins, dry-heaving over the line. Next time, I’ll take a gel 40 mins into the race to stave off this inglorious race finish action.

Finishers received isotonic drinks, water and bananas as they completed their run/walk in Gloucester Park. A timing mat on the way to the exit allowed runners to check their chip race time, something I’ve never seen at any other race but which really is a great idea. Bags dropped off the previous day at Perth Arena were ready for collection after the run, an essential for those like me who are totally intolerant of the cold. Shuttle buses worked efficiently in ferrying finishers back to the CBD to catch free public transport home again. Or in my case to a soccer game.

The only quibble I’d have is that it would be nice to give all finishers, not just the 21.1km runners, a medal. I’d much rather a medal than a t-shirt I’ll never wear as I only run in singlets. Still, from the main sponsor, HBF’s, point of view, I can see that the t-shirt is a better marketing tool. Did I mention that they are EVERYWHERE?