At the start line of this year’s Angkor Wat Half Marathon, rather than worrying about the 21.1km ahead, my mind was preoccupied with the issue of gender inequality. Lofty thoughts however they were not. I was eyeing the back of a runner, a male runner, who was peeing against a tree. Not fair! I needed the loo too, despite having just been to the portaloo, but with only minutes to go to the starting gun, I wasn’t going to risk missing the start of the race. Been there, done that! While I was feeling hard done by, other runners were climbing a mound of rocks to view Angkor Wat temple in all its sunrising glory. There can’t be many start lines to match this one but as ever my mind was (wishing I was) in the toilet. 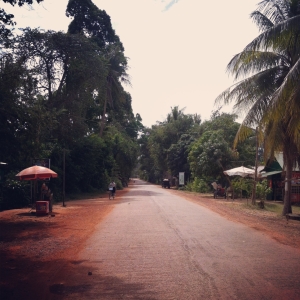 Blinking bladder aside, the race went very well. I got stuck behind a thousand runners at the start, but managed to weave through so that by the second kilometre I was doing a comfortable pace. I wasn’t going to risk ruining the race by racing; this was my chance to exorcise the misery of the previous year and savour the delight of running in such a special, and thankfully flat, place. Unfortunately after much mithering, I had opted not to take along my phone to take photos as I was already carrying a fuel belt. I sort of hoped I’d meet lots of people who’d take pictures and share them but that didn’t happen so here I am writing about running in a beautiful, special place with little photographic evidence. The photos I do have are from a family trip back in December 2012.

As usual, crowds of locals cheered on runners. I high fived as many kids as I could. My eight-year-old’s index finger spends a lot of time tucked into his right nostril but I put thoughts of hygiene aside; these kids probably had better manner’s than mine anyhow. Water stations provided small water bottles which is a waste really as most runners ditched the bottles after only a few sips. The volunteers were excellent at opening the caps and handing the bottles over and there was no issue of crowding at water stops as the route is wide and the runners were well spread out after a few kilometres. Kids collected the bottles for recycling all along the route so at least someone was benefiting from the excess of plastic.

I didn’t stop. I counted my steps to distract me from negative thoughts and worries. I barely looked at my watch. And until about 17km, all was going really well. I dared to think that I was actually enjoying myself. Then I started to feel a bit whoozy, a bit like motion sickness, a too familiar feeling from previous half marathon races. At least this time, the race was almost done when discomfort hit. I kept going, a little slower, but determined that I wasn’t going ruin yet another race. I can see from the official race photos that I must have been hurting by the end as my head is hanging and I’m staring at the ground, willing one foot in front of the other. At this stage, the 21.1km runners had merged with the 10km runners/walkers so more and more supporters – friends, family and fellow runners – stood along the verge, cheering people on. I seriously could have given one particular cheering American lady a big hug for telling me I was ‘awesome’  – I felt like sh*t – but that would have meant stopping and that wasn’t an option if I wanted to finish. Around the same time, I spotted monkeys hanging out of a tree. After all my years in Asia, monkeys are still a novelty and they served as a timely reminder that for an Irish ‘girl’ who discovered running mid-life, running around 12th century temples in Cambodia is a freakin’ amazing experience even with a nauseous stomach and heavy legs. Such thoughts got me to the end.

And I finished, happy for once. It was the fastest half marathon I had run but more than anything I was relieved that I hadn’t had a miserable race experience, only one that got mildly miserable near the end. When the official race results came out, my chip time was 1:50:59, a few seconds under what I had on my Garmin. I cared but I didn’t. I’d done such a good job of telling myself that my time didn’t matter that I had come to really believe it. I never run my fastest on race days but at least on this race day I had managed to run faster than on others without totally losing the gut plot (as I did last year at Angkor Wat and back in May at Borneo International Marathon.) I think the problem is low fuel and hydration which next time I will try remedy with a second gel at 14km. 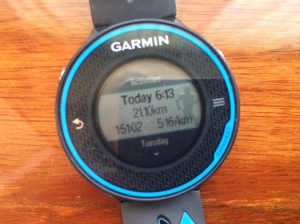 I’m still injured of course. My ITB hurt from 9km but I could run. It hurt a hellava lot more once I crossed the finish line. I was limping for the rest of the day. But it was worth it because for the first time in 7 half marathons, I didn’t wish I was somewhere – anywhere! – else. You could say that I took the endure out of endurance. The phrase ‘never again’ did not even enter my mind; that certainly was a first!

As for the bladder? Well I showed it who was boss. After bargaining with it that I would stop behind a tree – as I saw numerous men do along the route – it gave up nagging at about 10km. In fact it went into a coma and didn’t bother me for another six hours. If I ever run in Cambodia again – it really is a long trip from Perth but this year it was certainly worth it – I’ll make the effort to climb up and gaze at Angkor Wat as the sun rises. I might even take my phone along to take photos. For the record, I don’t really have any desire to be a man, though on my arrival in Cambodia, my wish was momentarily granted.