I’m getting lazy. Not about running but about blogging. I half wrote a post about the Mandurah Half Ironman which I ran a few weeks back but I didn’t finish it. The blog post, not the race. I finished the race, despite the heat which matched that of the other Half Ironman run I did in Putrajaya back in April. It was a freakishly hot day, and only the second day during which I can honestly say that I have felt warm since moving to Perth. 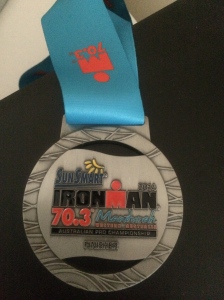 I’ve never been a good finisher which is possibly one of the reasons why I like racing – it forces me to finish something that I usually regret starting. Crossing the finish line is like waving a magic wand – ‘what was I thinking?’ and ‘OMG I can’t run another step. I want to stop!’ transforms into ‘Wow. I did it. I feel fantastic!’. And so it was at Mandurah. I spent 1hr 54 minutes thinking ‘This is crazy! How do people swim, bike and run without dying?!’ but once I crossed the line, and limped, medal in hand, with my outraged ITB screaming at me, to meet my husband and kids, I felt euphoric. I hadn’t done a personal best but I had finished! I don’t think the power of finishing a race will ever diminish, even though I rarely perform as well as I’d like. I’ve decided I won’t die disappointed if I don’t break the 1:50 Half Marathon barrier but I will keep trying.

As I often have things to say about running but I don’t always have the time to finish blog posts, I’ve set up a Facebook page to which I can post shorter snippets, as well as links to running articles and information about running events. It will also allow people to comment on Facebook and the comments will appear here on the blog. I’m still very disconnected from the running community in Perth but instead of just pining for my running buddies back in KL, I’m hoping that this new page will allow me to connect to new runners as well as old, until I figure out how to get my butt to a gathering of real runners as opposed to the virtual kind.