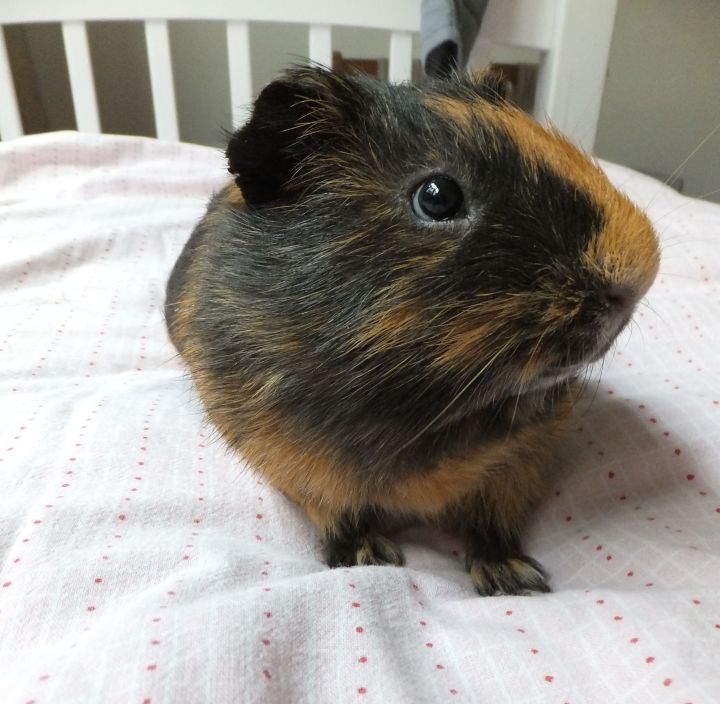 Last Sunday night, I sat down and did something I’d been procrastinating over for weeks. I made a poster advertising our four guinea pigs for adoption. And I cried. Guinea Pigs can’t fly, even on commercial airplanes, so we can’t take them with us to Australia. We’ve had Tiger, Dexter, Hermione and Grace for between two and a half and three years. It’s a bit complicated how we ended up with four in three separate cages but a Twitter feed description of the story would go something like: Two boys, one death, one boy, new friend, friend is a girl, lucky discovery before pregnancy, two more new friends, now two pairs, boys fight, separate, girls live happily ever after together. I put a few copies of the Guinea_Pigs poster in the trunk of my car with the weak intention of placing them on noticeboards at my children’s school. I hated the idea of advertising our little pets to total strangers. At physiotherapy, I told Akmal about my tale of projected loss and woe. ‘I’ll take one,’ he said as he released my posterior tibialis. ‘You will?’ Talk about making a girl happy on a Monday morning! Then Diana, a lovely lady with three children, who works at the clinic said she’d take one. I promised pictures. On Friday, at my 50th physio session since September, Diana was very excited about the guineas and agreed to take the pair of girls. An hour of so later, she Whatsapped me to ask if Dexter was still available as another physio wanted to take him. 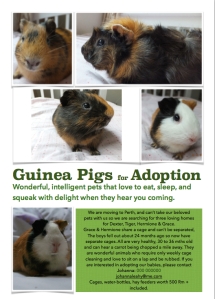 So I didn’t need the poster, the animals are going to people whom I know will care for them, and all because I suffered a PTT injury which still niggles especially after hill workouts. Ain’t life funny. I haven’t handed over the animals yet but am very, very relieved that this major emotional hurdle has, if not been breached, well at least approached with a minimum chance of upset. I hope. In other news, I received an email from Garmin Malaysia today in response to my query about sponsorship – back in January. Yes, they’d like to sponsor me with a custom-made run top for racing and a watch, in return for reviewing their products and wearing the top and publishing photos of me wearing it on my blog. They suggest I get a Forerunner 620 from them, Aarrgh! My husband bought me a new Forerunner 620 four weeks ago for my birthday – and I love it. And I’m leaving Malaysia. But I hope I can still work something out. I have four races in Malaysia over the next six weeks, all of which I will write about, and during which I will used my Garmin watch. And I’m not going to stop racing when I get to Australia. I’m just going to be a lot further down the pack. But I plan to still write about my experiences. This is another reason why it sucks to move about. Good things  – and friendships too by the way – always materialise as you’re heading for the exit!

Three non-blondes 😂😂😂
Monday Run ✅
Longest run in the longest time tagging along with these folks on the third day of their crazy seven half marathons in seven days challenge. We started today’s run with a parkrun as, you know, you can’t miss that Saturday fix.
So the gardening is going well 🤦‍♀️
Ready for our weekly catch-up on the run 😊
Lovely surprise on our run this morning ☘️🇮🇪
HAPPY ST PATRICK’S DAY ☘️🇮🇪
One of my happy places, surrounded by fun, supportive, dynamic women who also happen to run.
First runs are special.
Made it to the gym incognito. I’m smiling, honest 😀
What with the heat and the hills and the ageing muscles, I refused to run beyond 13km this morning.
I am one of only ten people in the whole of Western Australia who doesn’t own a dog. And I like dogs. But, I’m scared of them. I’m scared they might bite me, as my dad’s Cairn Terrier did on my 21st birthday, or trip me up, as I’m perfectly capable of doing without canine assistance, thank you very much.
Touristing at Shelley parkrun today with the Cottesloe parkfunners. What a friendly, encouraging bunch they are at Shelley. Great parkrun 😍
MAWA Burswood 12km ✅
🌳Edinburgh Oval parkrun🌳
Cottesloe parkrun is back!
We’re a very serious bunch at Masters Athletics WA *.
Mother-Daughter volunteering duo 😍 🌳
Sunday long (& hilly) run with @orange_fitness_nutrition. Had to stop for a photo opp in front of the Perth skyline.
Parkfun 😁