I never wanted a tattoo, so it has come as a bit of a surprise that I now have one on my left shoulder. As my daughter put it: ‘I still can’t believe that you got one. I thought it was just an idea but you really did it!’

The idea emerged after our January trip to Thailand. Walking past a series of tattoo parlours, one of my kids joked that we should get tattoos. ‘Oh but your dad hates tattoos,’ I said. ‘Well, I dunno, maybe a little one might be nice,’ the tattoo loather said. Huh? So the seed was sown.

A couple of weeks later, a friend put ‘I’m getting a tattoo’ on her Facebook status. ‘I’m thinking of getting one too!’ I responded, amazed at the coincidence. It turned out that she had no intention whatsoever of getting a tattoo but was participating in some Facebook meme. Too late! I’d outed my vague idea and proceeded to discuss it online as if it were a concrete idea. Designs were discussed. Tattooists were recommended. Hitherto unknown (to me) tattoos were revealed. It was hard not to get carried away on other people’s enthusiasm for permanently dying a portion of my skin.

Every Thursday, I run with my friend KC. She has three tattoos, though I didn’t know this until I expressed my own vague idea, now concrete idea, now ‘let’s make an appointment’ idea. She offered to go with me to look at designs. I knew where I wanted it – on my shoulder so that it would be visible in my running tops – but I wasn’t so sure of the design. By the way, I’m certain that if I hadn’t taken up running, I’d never have considered getting a tattoo. I’m not altogether sure why that is. 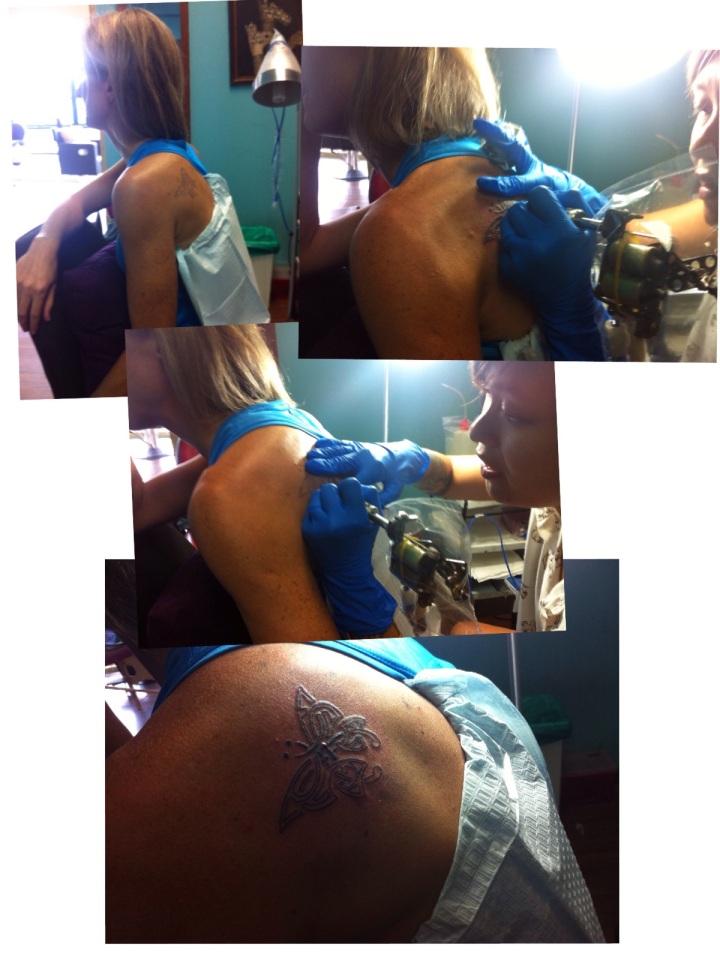 After a bit of thought, I planned on getting a Chinese symbol related to running which is why, of course, I ended up with a Celtic Butterfly. The Chinese symbol was to signify my time in Malaysia as well as my newfound passion for running but then I realised that there are probably people in Europe, who’ve never been to Asia, sporting Chinese tattoos so I reverted to my Celtic roots. Not being religious at all, I wasn’t into a Celtic cross and a shamrock was well TOO Celtic so I found a butterfly online and liked the look of it. KC loved it, the tattoo artist, Lina, thought it would work, so an appointment was made, a deposit was paid, and I didn’t tell my husband as he was in Australia and it slipped my mind.

This is the most amazing thing about this whole tattoo experience. I am a control freak, with chronic anxiety, who does nothing lightly, worries constantly, and is rarely spontaneous. Yet, the prospect of getting the tattoo didn’t bother me at all. There were no nervous trips to the loo as I waited with KC in the waiting room, no fidgeting, no agitation. I was as calm as I am capable of being, sober. I was bothered much about the pain, as I knew it would be fleeting. I’m sure some of this uncharacteristic zen-like feeling was due to the fact that KC was with me and that Lina is really a lot of fun and I trusted her completely (don’t ask why, I just did). For once I surrendered control and it was a very pleasant experience indeed.

KC held my sweaty hand throughout the process and the three of us chatted about everything from childbirth to jobs and of course tattoos. I asked Lina if people had ever left in the middle of a tattoo as they couldn’t’ bear the pain. Plenty have apparently. After thirteen years, Lina still remembers the first tattoo she inked, and does three or four clients a day. The inking process was mildly uncomfortable at times but nothing compared to the pain of Shock Wave Therapy on my foot. There was a scratching sensation but little more. Afterwards, I felt like I had a little bit of sunburn on my shoulder.

But I didn’t. I had a Celtic Butterfly which I’ve decided symbolises my provenance, combined with metamorphosis and change. We’re all changing all the time, nothing remains the same, but I’m also living a life that requires massive change and upheaval every few years, so the butterfly symbolises that reinvention. Clever eh? Yes, phew, as I only came up with that after the permanent mark had been inked on my skin. I chose the butterfly because I liked the look of it and was too lazy to do much more research!

So it’s there for good, a souvenir of Malaysia, a badge to display when I run, and a reminder of a rare episode of calm. Luckily my husband, who I did tell before the appointment, pronounced the tattoo ‘very nice’ and ‘elegant’. KC says I’ll definitely want another one. I can’t contradict her. But for goodness sake don’t tell anyone I said that as sometimes, a few loose words about vague ideas can develop into full-blown actions, and I wouldn’t want to make a habit of such rash behaviour!

10 thoughts on “The One Where I Get a Tattoo”

Three non-blondes 😂😂😂
Monday Run ✅
Longest run in the longest time tagging along with these folks on the third day of their crazy seven half marathons in seven days challenge. We started today’s run with a parkrun as, you know, you can’t miss that Saturday fix.
So the gardening is going well 🤦‍♀️
Ready for our weekly catch-up on the run 😊
Lovely surprise on our run this morning ☘️🇮🇪
HAPPY ST PATRICK’S DAY ☘️🇮🇪
One of my happy places, surrounded by fun, supportive, dynamic women who also happen to run.
First runs are special.
Made it to the gym incognito. I’m smiling, honest 😀
What with the heat and the hills and the ageing muscles, I refused to run beyond 13km this morning.
I am one of only ten people in the whole of Western Australia who doesn’t own a dog. And I like dogs. But, I’m scared of them. I’m scared they might bite me, as my dad’s Cairn Terrier did on my 21st birthday, or trip me up, as I’m perfectly capable of doing without canine assistance, thank you very much.
Touristing at Shelley parkrun today with the Cottesloe parkfunners. What a friendly, encouraging bunch they are at Shelley. Great parkrun 😍
MAWA Burswood 12km ✅
🌳Edinburgh Oval parkrun🌳
Cottesloe parkrun is back!
We’re a very serious bunch at Masters Athletics WA *.
Mother-Daughter volunteering duo 😍 🌳
Sunday long (& hilly) run with @orange_fitness_nutrition. Had to stop for a photo opp in front of the Perth skyline.
Parkfun 😁