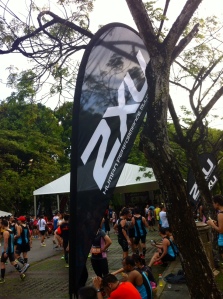 Rain and hills were the order of the day – though I’m not sure 6 AM is technically day as it’s before sunrise here! As it was my first race since early June, and my longest run since late August due to my PTT problem, I kept my expectations low for yesterday’s 2XU Compression 15km Race. There was no question of aiming for a personal best; yesterday was about running, simply because I was able.

My goals were to:
Find a parking spot not too far from the Start line.
Make one last dash to the portaloo before race start.
Run joyously.
Finish (perhaps not joyously, but in one piece).
Have fun!
Well, tick, tick, tick, tick and tick!

The race started 10 minutes late due to rain. Being Irish the rain didn’t bother me, and anyway after a few kilometers running in the Tropics, even at night, your clothes are sodden so the rain was a good thing – it kept the temperature down to a nice, chilly 25 Degrees Celsius. Yes, I know that’s a heatwave in Ireland but I’ve made some adjustments to my thermostat after 8 years in South East Asia.

I felt no pressure to be near the front to start, because I wasn’t racing right? Mind you when you find yourself standing beside a girl who is carrying a rucksack and updating her Facebook status on an iPad Mini, it’s probably a good idea to try push a little forward if you have any intention of actually running. So, next time, I will be ballsy, and try squeeze forward nearer the Start line. Though I wasn’t truly racing, I still regret the 2-3 minutes of my life lost trying to get to the Start mat after the gun went off and then through the tight-knit crowd in the first 1.5 km.  The good thing I suppose about starting in the middle of the pack is that you get to pass lots of people throughout the race 🙂

I think I’ve mentioned in a previous post that I had problems with feeling nauseous at my last two runs – a 21km and a 16km. In fact I felt so sick that I slowed to a halt at the Singapore Sundown Half Marathon at 20 km thinking I couldn’t go on without throwing up. I continued to feel sick for at least 15 minutes after both these races finished. On both occasions, I had taken a gel around the 9 km mark. Yesterday, I went gel-less, and instead relied on a 8oz Nathan hand-held bottle containing Accelerade. I also sipped water at every water station. And, no nausea! For the first time in a long time, I actually passed people in the final kilometres and my 15th kilometer was my fastest. Instead, of going over the line, holding my guts and moaning, I sprinted with a guy who challenged me to do so for the final 50m. In the excitement, by the way, I forgot to stop my watch- yet again – but think that my time was 1:26, well down on my 16km with nausea in June (1:19) but the difference this time was that I felt good finishing, and this route was super hilly. And, I wasn’t pushing for a personal best, just a good time (get it?!)

If there is one word that will forever be synonymous with yesterday’s race it is HILLS! I wish I had a photo to show non-KL people what I mean but suffice it to say that one of the two KILLER hills is referred to as ‘La Mur’ – according to my cyclist husband. That’s The Wall in case you’ve forgotten your French. Have a look at the elevation profile if you think I’m exaggerating. The second steep incline was equally challenging and very, very long. I walked up most of both these; though I like a nice hill or two, and ran well on the more moderate inclines yesterday, I wasn’t going to tear my Achilles Tendon or burn myself out on these babies. My goal was to finish (joyously), remember? I ran pretty fast downhill. In fact, my pace was all over the place!

I paid no attention to my watch the whole way around, instead I tried to focus on my rhythm of my stride, the view – spectacular sunrise with a view of the Petronas Towers – and the sense of collective effort that surrounded me. The guy who belched very loudly on the first long incline also served as a brief distraction. Whenever my mind started to give me a bit of grief, as it always tends to, especially near the end of a race irrespective of whether it’s a 10km or a 21 km, I repeated the mantra ‘I Love Running’ to match my cadence. It’s true and it worked. I love running and my recent forced absence, has given me a new appreciation for just how deep that passion is. 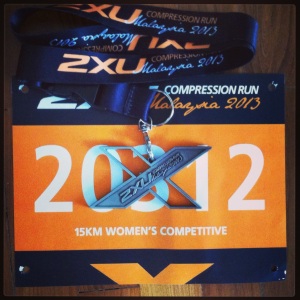 I doubt I’ll be in Malaysia next year, but if I was, I’d definitely register for the 2XU Compression 15km run (and do some hill-training in preparation). Plenty of portaloos, well-organised and frequent water stops, excellent route markers, enthusiastic volunteers giving directions and support, nice wide roads throughout the route and some amazing views of KL. The medal is pretty cool too.

Killer hills, rain, 4 AM breakfast, belching runners? Bring it on!

p.s. For those interested in my PTT (right foot) recovery, my foot felt good throughout the race though the Achilles Tendon on the left leg was not happy. As soon as I finished, I felt pain in my right arch and left Achilles, and iced them both before heading home. I’ve been stretching and rolling the arch with a tennis ball in the 24 hours since, as well as icing and elevating as much as possible. This morning, I did a slow recovery 5km. The arch still ached but there wasn’t a murmur from the Achilles so hopefully it has forgiven me yesterday’s   exertion.

Finally, started some strength training after many, many months of gym-free living and running. Hoping to get stronger and faster, or at least, stop getting slower. Let’s see how this goes 😃
Happy parkrun day 🏃‍♀️ 🏃‍♂️ 😃
Bumped into the new PM this morning on my first King’s Park trot in ages 😊
Just one more sleep 😄
Joondalup Half Marathon. HM no. 31.
Lake Claremont parkrun. It was my #249. Next week, I’m Run Director so the #250 is hold for a week.
After a two week delay thanks to my Covid-infected family, I ran Lake Claremont parkrun this morning. It was glorious to finally run the course after the months’ of build-up and planning. The turnout was over 100 so thank you to all the parkrunners who have supported this new event, congratulations to those who have only just discovered the parkrun *drug*, and thank you to the volunteers who made it happen.
So happy to receive this great photo at home just after 8 am this morning.
Some more photos from Lake Claremont parkrun trial run yesterday. We were so fortunate to have parkrun volunteer extraordinaire-he has his own volly vest-Paul Van Der Mey and his beautiful wife (and parkrun stalwart) Caroline in attendance. Paul has the magical ability to produce the most flattering running photos, no matter the subject. His trash bin must be teeming with shots of wobbly chins, cellulite, and dubious facial expressions but he is too much of a gentleman to let them see the harsh glare of online self-scrutiny. He has even managed to make my extremely bad hair day look like a standard, should have used a ponytail, bad hair day.
Thank you to the volunteers and thirty participants who came down to Lake Claremont this morning for our second trial parkrun. You are all awesome 🤩
Marshalling at @masters.athleticswa in Perry Lakes 🏃‍♀️
Trainee Run Director at Perry Lakes this morning. Must find some way of carrying the reading glasses. Maybe it’s time to string them around my neck 👵👓
Shooting the breeze with these wonderful women at the tail end of @cottesloe_parkrun 🥰
In the excitement of setting off for my first run in four days -4!- I left my water bottle behind - and it was 34C! I rarely run 5km without a water bottle even in winter but as I had a vague recollection of a water fountain beside a dog park somewhere in the vicinity, I kept on going.
Watched a really good program called ‘After Life’ last night about a man whose wife died but whose true love is really his dog. Of course!
It’s not often I’m happy to be on the short side but today I was, as I avoided this fella🕷️
We’re hiring a Club Administrative Officer. This is a paid, part-time position (approx. 20 hours), which can be, for the most part, done from home. We’re looking someone who:
Thursdays mean 8km easy with @allyjorourke from Leighton Beach to Rous Head Lighthouse and back. We started running together weekly during our first COVID lockdown in March /April 2020. Great habit. Lucky us 🤩
Exploring potential routes for a new parkrun at Lake Claremont 🏃🏃‍♀️
Eighth Christmas Day at parkrun, my favourite tradition 😍