In the very distant future, I imagine my kids as adults coming to me, asking questions such as: ‘mum, your granddaughter Allegra is working in her grade 2 family history project and wants to know what it was like living in Malaysia in the Dark Ages (she’ll mean 2013). Can you help?’
In this little montage in my brain, I am the type of granny who still runs 50 km minimum a week and frequently achieves top five positions in the over-80 category of international half marathons. And not only because most of the other competitors have had the decency to hang up their running shoes once they’re too wrinkled to rock a pair of shorts without making young people gag. Or because most people my age are dead.
‘Well, darling, you could look at my blog archives, but of course all that technology is so outdated that it would be a major task to access the info,’ I might say ruefully. I’ll still use words like info when I’m 80. ‘Or why don’t you have a look at my Google search history, that should help,’ I’ll say before wirelessly transferring my entire Internet search history for the years 2010-2014 to my granddaughter’s brain.

Surprisingly I wasn’t the first to use any of these search terms. I am not alone in my injured not-allowed-to-run for three weeks state. The Internet is littered with the broken souls and bodies of injured runners though the streets of Mont Kiara continue to taunt me with the sight of many, too many, runners with appalling form who mysteriously seem to have escaped uninjured. ‘It’s not fair!’ I cry aloud as I drive past these trudging lopers on the school run. No, it’s definitely not fair! 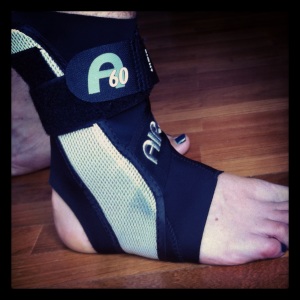 So I have pulled a ligament in my ankle somehow. After four days ice and rest, I ran 10km in 52 mins and thought I was back. I would pin on my bibs for the Live Great Run and the SCKL Half, I thought. Yes I would!

But I won’t. As after my 10 km, the foot became swollen again and a little bit sore. I decided to see an orthopedist just to get it strapped or something while I continued running. Well I got a fancy, expensive Aircast brace alright but also, the prognosis a runner dreads: you can’t run on that ankle unless you’re desperate to tear a ligament and never run again!

So there we are. I opted not to rename this blog the sad, floppy-arsed Expat Non-Runner and look at the bigger picture.  I have to be patient, keep my eye on the long term – and by long term I mean the races I’ve registered for in Oct, Nov, Dec & Jan, not the medal I’m going to win when I’m 80. The short-term though is going to be filled with a push-ups, physio and trillions of Google searches such as:

how to overcome a saddle-sore ass while not running with a sprained ankle,

I wonder what Allegra’s 2nd grade teacher is going to make of that!

Shooting the breeze with these wonderful women at the tail end of @cottesloe_parkrun 🥰
In the excitement of setting off for my first run in four days -4!- I left my water bottle behind - and it was 34C! I rarely run 5km without a water bottle even in winter but as I had a vague recollection of a water fountain beside a dog park somewhere in the vicinity, I kept on going.
Watched a really good program called ‘After Life’ last night about a man whose wife died but whose true love is really his dog. Of course!
It’s not often I’m happy to be on the short side but today I was, as I avoided this fella🕷️
We’re hiring a Club Administrative Officer. This is a paid, part-time position (approx. 20 hours), which can be, for the most part, done from home. We’re looking someone who:
Thursdays mean 8km easy with @allyjorourke from Leighton Beach to Rous Head Lighthouse and back. We started running together weekly during our first COVID lockdown in March /April 2020. Great habit. Lucky us 🤩
Exploring potential routes for a new parkrun at Lake Claremont 🏃🏃‍♀️
Eighth Christmas Day at parkrun, my favourite tradition 😍
Anyone interested in helping to set up a new parkrun at Lake Claremont? Get in touch please 😄
How’s this for colour coordination on our Tuesday run? ❤️💕
Paul Van Der Mey earned his 250 volunteer shirt over many years capturing the most wonderful photos of parkrunners doing what they love.
🔥NEW PARKRUN🔥
Look at that beach - smooth and compact - unlike the 133 previous occasions on which I’ve run Cottesloe parkrun was worth waiting for 🤩 💚💛🧡
Pre-Zamia pose. Survived another hills run - literally - didn’t see any snakes 🐍 😀
Colour-coordinated and cloudy. Tuesday run done ✅
The most isolated city in the world became even more relatively isolated today as Australian borders opened (outwards) but Western Australia tightened its rules of entry (while incoming flight caps from overseas remain abysmally low and two weeks hotel quarantine is mandatory). Vaccinated travellers can fly into Sydney and Melbourne from today, and walk outside into the community and head on home. Unless home is in Western Australia, then being fully vaccinated only gains you entry to our state after two weeks hotel quarantine (a delight that NSW and Victoria are reserving for the unvaccinated).
Gorgeous weather for a @masters.athleticswa volunteer stint, handing out finish tokens at the Cliff Boulder Handicap race.
Speedy @sophie__gee dragged me around the hills of Bold Park this morning 😃 She claims she used to only see the back of me at parkrun but nowadays she’s finished, showered, and had a cuppa by the time I cross the line. But I’m not bitter 😂 I’m inspired 🙇‍♀️- and she’s relentlessly encouraging and supportive. Running is life.
Two sweaty race laps of Bibra Lake, followed by a laugh & chat, and some very amateur bird watching 😀
👕 New t-shirt 👕